Ubisoft has announced that Anno 1800 has become the fastest-selling instalment of the world-building game’s history.

In its first week of launch, Anno 1800 has sold more than four times the copies of the previous title, Anno 2205 and since launch, Annon 1800’s player base has built over ten million ships, established over one billion grain fields, and grown civilisations of seven billion citizens across three million islands. 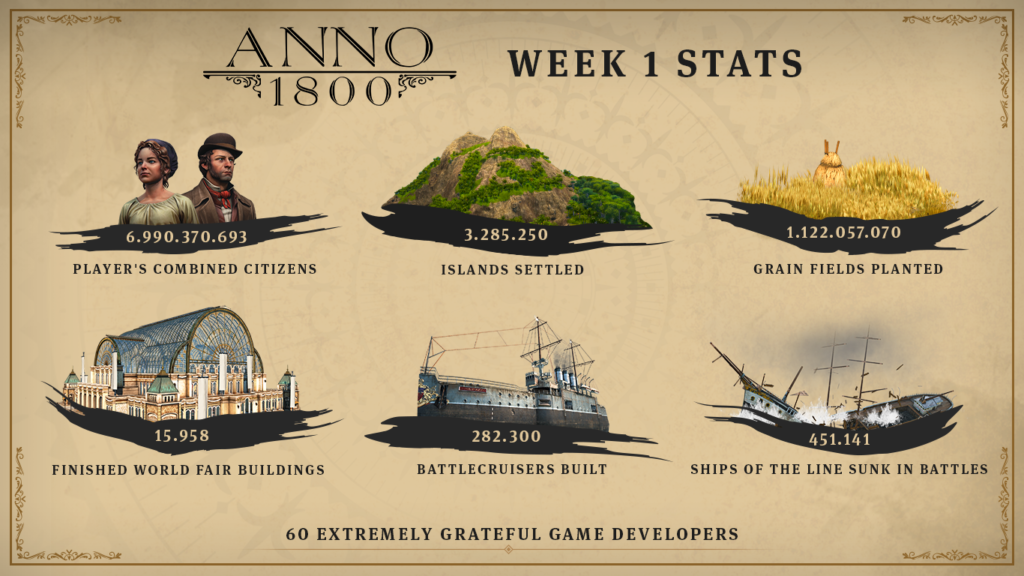 “Anno 1800 has been an incredible journey for all the people working at Ubisoft Blue Byte and we are so happy to see that players really enjoy playing our game,” said Benedikt Grindel, managing director at Ubisoft Blue Byte. “Since the announcement of the game, the community of Anno 1800 has provided us with countless useful feedbacks through our community platform Anno Union and helped us releasing an excellent game. We really feel privileged to have one of the most committed communities of the video game industry.

“After this amazing and successful launch, we now completely focus on delivering the best post-launch content possible for Anno 1800 and can’t wait to show you more!”

Ubisoft Blue Byte celebrated its 30th anniversary in 2018. Based at three sites across Germany in Düsseldorf, Mainz, and Berlin, Blue Byte’s 450+ developers not only develop strategy games like The Settlers and Anno, but also contribute to “big Ubisoft brands” such as Tom Clancy’s Rainbow Six Siege and Beyond Good and Evil 2.

It took 15 years of civil service monotony for Vikki to crack and switch to writing about games. She has since become an experienced reporter and critic working with a number of specialist and mainstream outlets in both the UK and beyond, including Eurogamer, GamesRadar+, IGN, MTV, and Variety.
@_vixx
Previous Nominations open for the MCV Women in Games Awards 2019
Next Riot staff consider walkout over the studio’s attempts to block a sex discrimination lawsuit