The inaugural Guildford.Games Festival, which will run from June 28-29th, 2019, has detailed some of the content coming to the event. The weekend-long festival – which has been supported by Guildford Borough Council, the UK games trade body Ukie, The University of Surrey, and Enterprise M3 LEP – is designed for the public, media, and businesses “to learn about the dynamic nature and importance of games companies located in Guildford, UK”. As well as speakers and a consumer expo, it will also include a charity fundraiser and the inaugural Guildford Games Awards.

The exhibit will also provide “career advice sessions and workshops for existing and prospective professionals, professional business mentoring sessions for small studios, advice on securing investment, 1:1 business meetings curated via on online matchmaking service, and a games expo for modern local studios to showcase their work”.

On June 29th the festival will switch its focus to consumers; school-age children, University students, parents and carers, the local public, and people interested in careers in the games industry. This second day of the festival is free to attend and will include an expo for players to meet developers, workshops, and an esports zone with multiplayer games.

Finally, the first Guildford.Games Festival Awards will close the festival on June 29th. Shortlisted candidates are as follows: 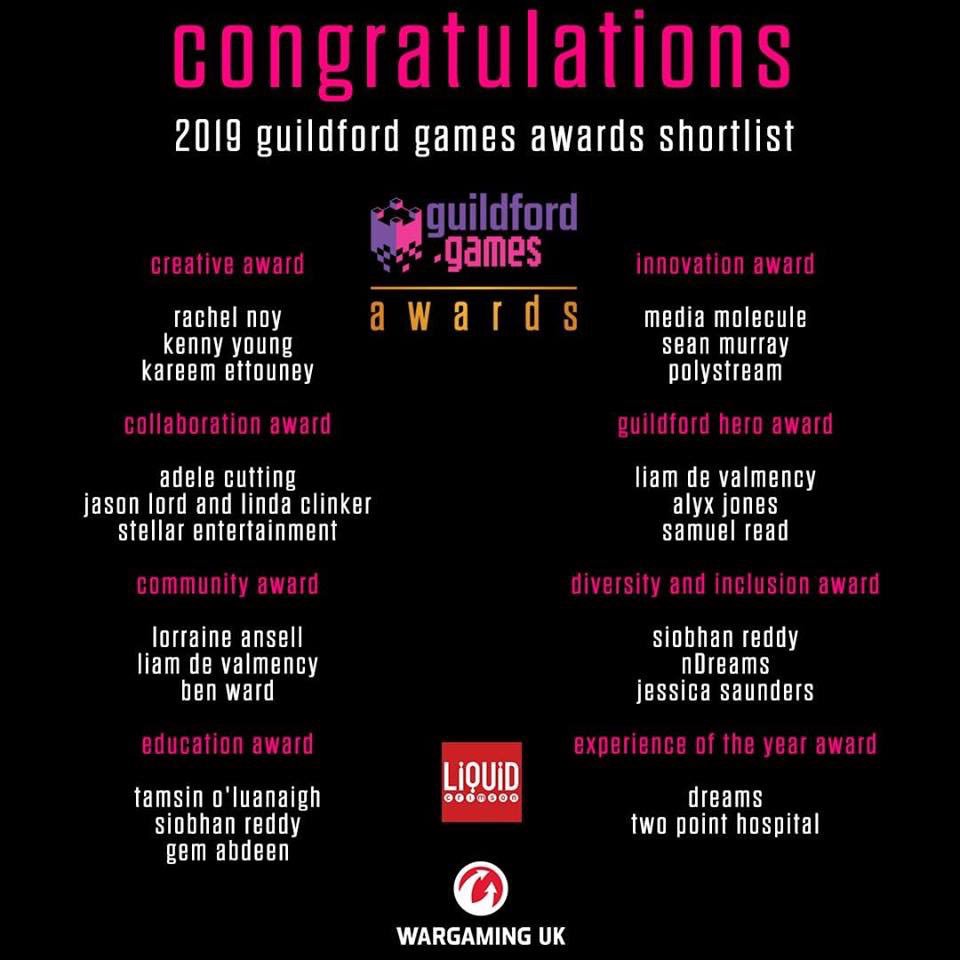 “Ukie are delighted to be supporting the first ever Guildford Games Festival this June. It is great to see the local council and games businesses working in tandem to showcase the incredible work of local games studios, publishers, and supporting organisations,” said Dr Jo Twist OBE, CEO of Ukie. “It is particularly gratifying to see the engagement with local schools, colleges, and the University of Surrey to promote and encourage the next generation of games makers to extend the historic legacy of game development in and around Guildford.”

It took 15 years of civil service monotony for Vikki to crack and switch to writing about games. She has since become an experienced reporter and critic working with a number of specialist and mainstream outlets in both the UK and beyond, including Eurogamer, GamesRadar+, IGN, MTV, and Variety.
@_vixx
Previous Ins and Outs – May 2019’s industry hires roundup
Next Larian Studios is developing Baldur’s Gate 3 for PC and Google Stadia