Stadia, POC in Play and Oculus headline MCV’s 30 Under 30 issue

Our April issue is out now and you can read it for free right here.

In this issue, we finally reveal MCV’s 30 Under 30 2019 – if you can’t stand the suspense you can click here to see who made it to the list. We’d like to thank everyone who entered and nominated their peers – based on everything we’ve read in the hundreds and hundreds of entries we received, the UK games industry has a very bright future ahead. Congratulations to you all!

Meanwhile, we also look into the Google Stadia reveal in this issue – could cloud gaming be finally ready for take off? The death of consoles, the next billion gamers, the Netflix of games: cloud gaming has all the hype. With Google finally showing (most) of its hand at GDC, we talk to critics, supporters, analysts and those working in the still-fledging sector about its potential.

Following the launch of POC in Play, we also discuss representation and inclusion of people of colour in the games industry with co-founders Adam Campbell and Chella Ramanan.

Elsewhere, we catch up with Inkle’s co-founders to talk about their passion for language. The developers tell us more about the soon-to-be-released Heaven’s Vault, which won the Ukie UK Game of the Show at GDC this year, judged by the MCV team.

We also talk to Jason Rubin, VP of AR/VR partnerships and content at Facebook, about the Oculus Rift S and Quest headsets and how they’re a huge leap forward in the VR platform’s maturity.

We also go back in time and take a look behind the scenes at the development of 1998 classic Baldur’s Gate with Bioware co-founder and now Beamdog CEO Trent Oster. 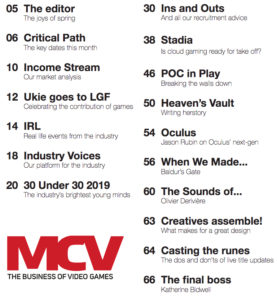 Marie Dealessandri is MCV’s former senior staff writer. After testing the waters of the film industry in France and being a radio host and reporter in Canada, she settled for the games industry in London in 2015. She can be found (very) occasionally tweeting @mariedeal, usually on a loop about Baldur’s Gate, Hollow Knight and the Dead Cells soundtrack.
@mariedeal
Previous Daybreak takes over H1Z1 Battle Royale development from NantG
Next MCV’s 30 Under 30 2019