Update: Details of initial leak have been confirmed by Google’s official announcement yesterday. Have made some small clarifications below to our initial story and added some details on launch titles.

Details of Google’s intriguing cloud-based gaming platform leaked ahead of time from respected French-speaking Canadian publication lapresse.ca. The leak detailed prices, subscription packages and launch titles ahead of Stadia ownbig reveal, all of which proved correct.

Stadia will launch in 14 countries in November 2019. Initially it will only be available as a £9/$10/€10 per monthsubscription called Stadia Pro, which will provide 4K/60fps streaming, along with a catalogue of existing titles – much like Xbox Game Pass. Subscribing will also give full access to Destiny 2 and all its content, though that’s a limited time offer.

A service with no monthly fee, called Stadia Base, will launch sometime in 2020, without any library of content. This service will be limited to 1080p streaming (which seems unusual given the power of the cloud-based hardware that Google has shown to date, is there other server hardware it hasn’t yet discussed?). Bandwidth requirements start at just 10mbit/s download and go up to 35mbit/s for the full experience. 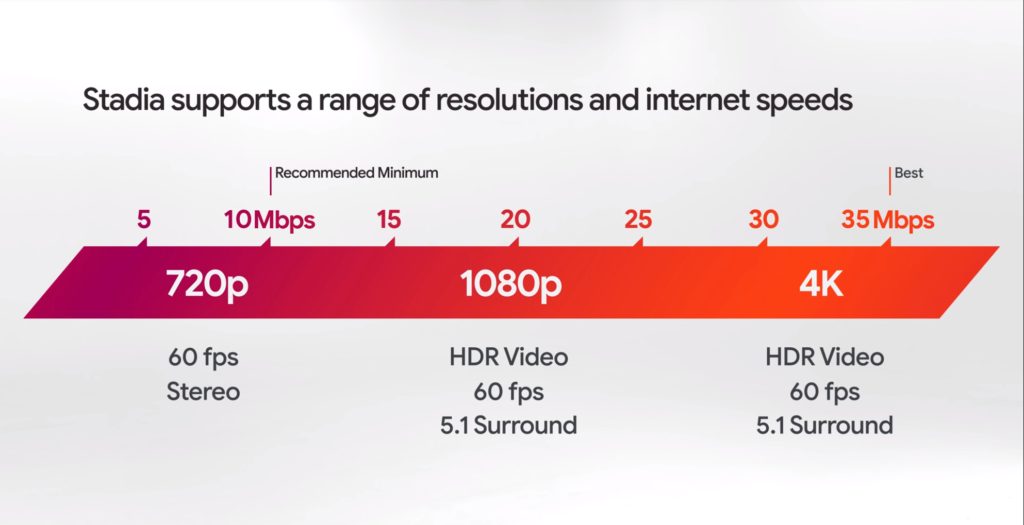 Both services will require consumers to outright purchase new releases in order to play them, presumably at typical retail prices through a Stadia store, though this isn’t detailed.

There will be a ‘Founder’s Edition’ of Stadia available for $169 from today. That will include a Stadia controller, Chromecast Ultra (required for 4K streaming) and three months of Stadia Pro, both for the subscriber and one friend. 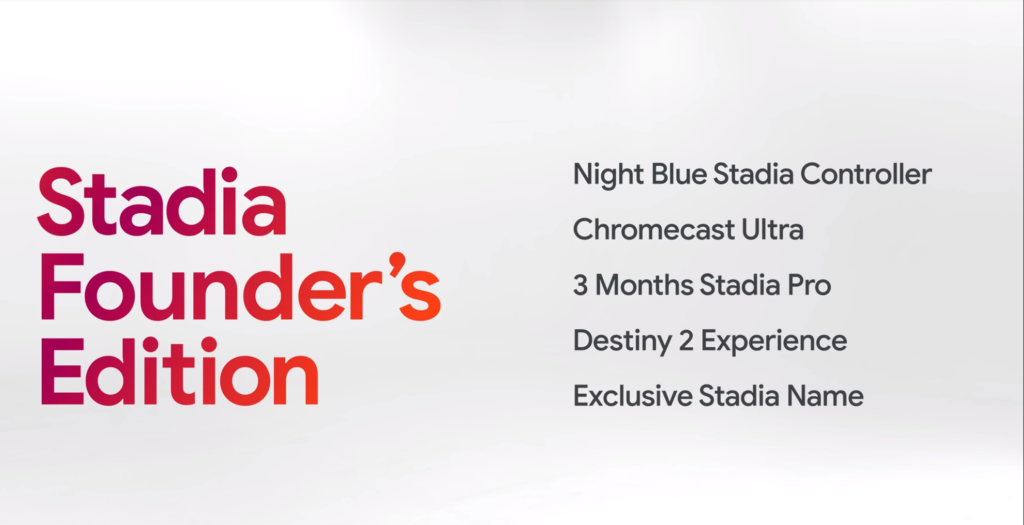 The leaked information came from an interview with Majd Bakar, VP and Head of Engineering at Stadia. a french-speaking Canadian who hails from Montreal.

He’s quoted as saying (our translation): “We’ve ran tests showing that there will no difference in latency between Stadia and an Xbox One S.” Though it’s not clear if here he’s offsetting cloud-based latency by comparing a 60fps Stadia game to a 30fps Xbox One S game – rather than comparing it to the Xbox One X say, which has more 60fps-capable titles.

Launch titles on the service, some of which will presumably will be included in Stadia Pro package, will include Assassin’s Creed Odyssey, The Division 2, DOOM and the last three Tomb Raider titles. A total of 31 games will be available at launch (see list below), including six from Ubisoft in total. Bakar commented: “All the games can go on Stadia, there is no constraint.”

Hardware support at launch appears to be more limited than we first imagined. From our understanding there’s obviously support for Chromecast to play on your TV, plus support for current Google devices, such as Pixel 3 and 3a and Pixel Slate, or you can play on any PC or laptop with Chrome installed. However, there’s no date announced for support of other mobile devices, such as Samsung  or Apple smartphones and tablets.

Bakar noted: “More devices will be supported as we go along. Our vision for the future is to have games available on any device.”

Overall, it’s around what we expected from the service, though the true vision, cloud-gaming for all, with no upfront hardware or subs cost, on practically any deice of your choosing, has been set back to some undefined point in 2020.

Cloud gaming should be a service, not a platform – and it looks like Google is starting to realise that