MCV’s new issue is out now and will be going to San Francisco with us later this month to be distributed at GDC.

So to get ready for the biggest dev show of the year, we’ve had a pre-GDC chat with Epic’s boss Tim Sweeney. The biggest game in the world, a digital store that could rival Steam and an incredibly powerful and popular game engine – with so many treasures under one roof, Epic has the tools to reshape the industry, if it can make them work together.

We’ve also been on the hunt for indie developers going to GDC and gathered their reasons to attend the event. So why are indies going to GDC and is San Francisco still the place to be? Up-and-coming studios give you the answers in this month’s issue.

We also look into Unity’s Project Tiny – the firm democratised game development with millions of regulars users, and now with Project Tiny it’s re-engineering its technology to bring interactive entertainment to the next billion devices.

Elsewhere, Rocksteady looks back at ten years of Batman: Arkham Asylum, one of the greatest superhero games of all time. With the team now working on a secret project, we look at how the Batman trilogy defined the studio.

We also have a chat with Daniel Krupa, Gav Murphy and Rory Powers about their new YouTube channel RKG, which has been an instant hit. The three creators pivoted away from IGN while sticking to the formula their fans love – we speak to them to understand their appeal and take stock of the sector as a whole.

Our Dev Diaries section is also growing this month. Our When We Made feature is of course still here, and this month Two Point Studios’ co-founders Gary Carr, Ben Hymers and Mark Webley taking a look behind the scenes at the development of Two Point Hospital, from its roots in Theme Hospital to how Lionhead’s difficulties sped up its creation to how you should never underestimate UI.

On top of this, we’re introducing a new music-focused regular called The Sounds Of…, inspired by our recent investigation on making music for games, as well as brand new feature Life on the Frontier, where Frontier devs talk about their latest work. They join Creatives Assemble, where the team at Creative Assembly debunks dev role myths, and Casting the Runes, where Jagex devs talk about their latest adventures. 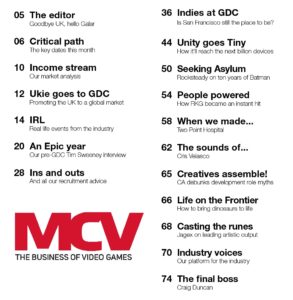 Marie Dealessandri is MCV’s former senior staff writer. After testing the waters of the film industry in France and being a radio host and reporter in Canada, she settled for the games industry in London in 2015. She can be found (very) occasionally tweeting @mariedeal, usually on a loop about Baldur’s Gate, Hollow Knight and the Dead Cells soundtrack.
@mariedeal
Previous 505 Games’ parent company, Digital Bros, reports net financial debt of €10.1 million
Next Ins and Outs – February 2019’s industry hires roundup