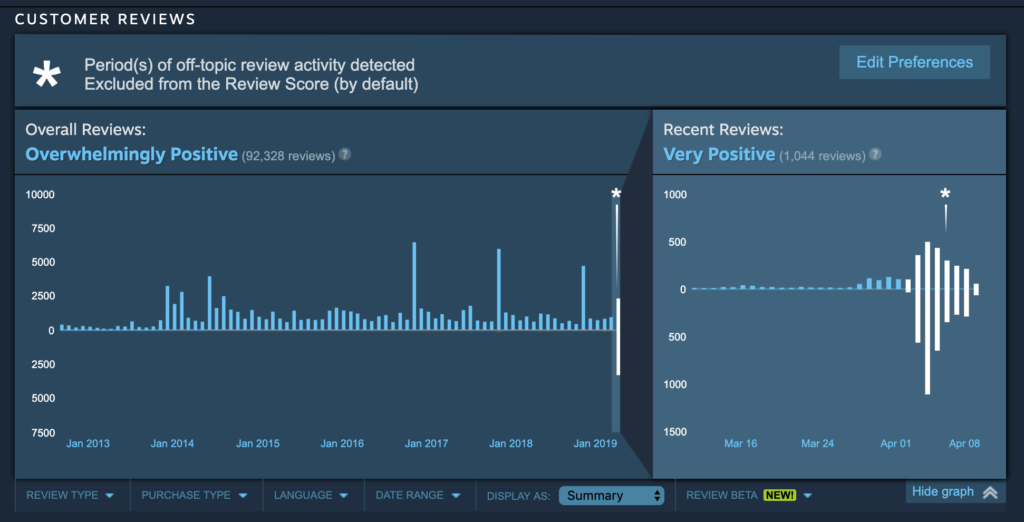 Defining a review bomb as one where the focus is on a topic that Valve considers unrelated to the actual satisfaction of a game, Valve announced last month it was introducing a new tool that identifies any anomalous review activity on all games on Steam.

According to Steam DB, the new feature has already stripped in excess of 4000 negative reviews from 2K’s Borderlands and Borderlands 2 Steam storefronts after fans hit back at 2K’s decision to enter into an exclusivity partnership with the Epic Store for Borderlands 3 on PC.

Borderlands 2 is the first game on Steam to make use of the “off-topic reviews” marking. Over 4000 reviews are excluded from the rating calculation. pic.twitter.com/kUMN0Lqdx3

Valve announced the new measures in March, hoping to control review bombing and “ensure [reviews are] accurate and trustworthy”. While the system does not censor written reviews on the site, prospective purchasers are less likely to be misled by a negative aggregate score on the game’s storefront.

Borderlands 3 will release September 13th, 2019, exclusively for PC on the Epic Games Store. It is expected to open up to other PC platforms in April 2020.

“Hi! What part of “2K/Take Two has exclusive publishing rights for Borderlands 3 and makes all decisions regarding price-points, territories, distribution and platform partnerships. Please direct all inquiries regarding any of those topics to 2K.” do you not understand? Love you!” Pitchford said in a tweet, responding to fan backlash. “As a customer, I’m happy to shop in different stores – already do! I’ve bought games from Xbox, Playstation, Switch, Steam, Origin, GOG, Humble, Uplay, Epic and other stores. To me, exclusives are fine when they come w/ advantages and when they are short – say, six months.

It took 15 years of civil service monotony for Vikki to crack and switch to writing about games. She has since become an experienced reporter and critic working with a number of specialist and mainstream outlets in both the UK and beyond, including Eurogamer, GamesRadar+, IGN, MTV, and Variety.
@_vixx
Previous Hideo Baba leaves Studio Istolia and Square Enix ‘to make way for the new generation’
Next Daybreak takes over H1Z1 Battle Royale development from NantG