Analyst firm Niko Partners has predicted that China’s console market will double in size between 2019 and 2024. While that sounds impressive, it will still remain relatively small in comparison to the potential numbers, with the number of console gamers increasing from 11m to 19m over five years.

The company revealed a number of headline stats from a new report on the region (costing $7,400 if you want access to the full details).

China’s console and TV games market generated $997 million in revenue in 2019 and is set to reach $2.15 billion in 2024, the report predicts. It notes that those figures are the full market, irrespective of source: “This includes grey market revenue of hardware and software, alongside legal sales.” 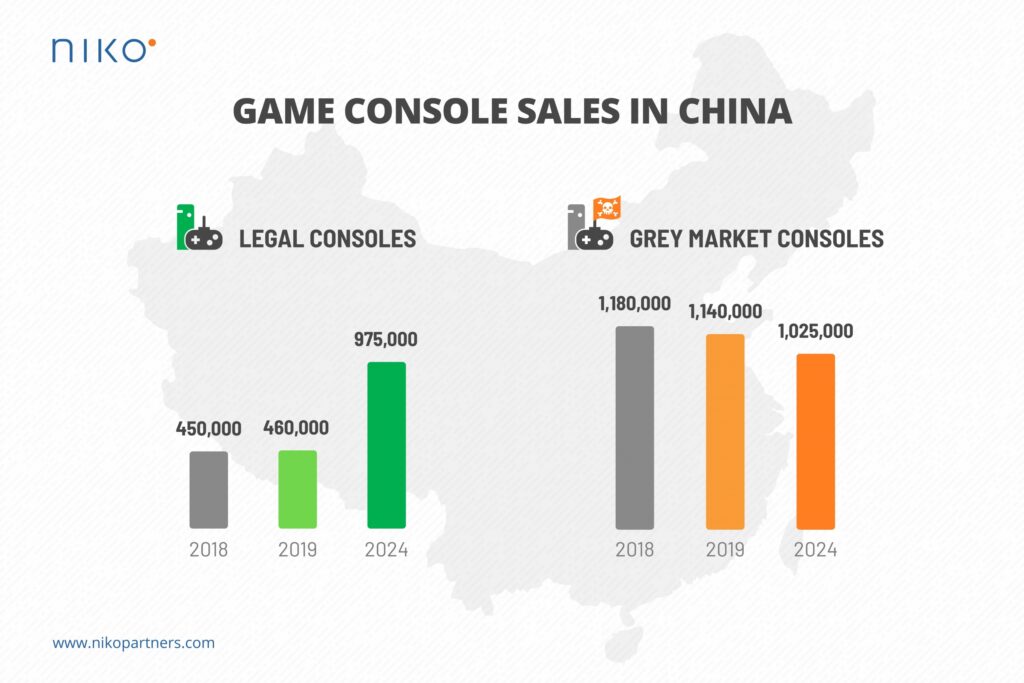 Niko sees strong growth in the official market over the period, with the number of legally-bought consoles doubling in the region, however this will be partly offset by a slow decline in the grey market as a result.

And it will be Switch and the new generation of consoles that will drive growth: “The increase in spending through 2024 will be primarily driven by continued sales of Nintendo Switch, the introduction of a new console generation with Sony’s PlayStation 5 and Microsoft’s Xbox Series X, as well as increasing demand for HD games available on consoles, from both overseas and domestic publishers.”

Xbox has been bullish about ensuring that the Xbox Series X gets a global launch this time around, unlike the last generation, which lagged behind badly in Japan for instance, but even that intention doesn’t mean China will receive new devices at the same time. And that will further perpetuate the grey market.

“China’s tough regulatory environment is currently a negative and prohibits growth of the legal market.”

“The grey market plays a large role in China due to strict regulations that have led to limited legal console games, and is set to remain the majority of revenue through 2024 as Chinese gamers import titles from overseas when they cannot buy an official version domestically,” said Niko’s report, adding: ”PS5 and Xbox Series X (expected to launch legally in China during 2021) will be key drivers of growth.”

Switch is currently the best-selling console in China, with PS4 being the established leader (no great difference there), and Niko Partners president Lisa Cosmas Hanson told GamesBeat.

“Consoles need a large installed base for software and services sales to grow,” Hanson said. “Pricing of hardware will be key, as are the features and games that each console provides. E.g. Switch popularity in China boosted by noncore games such as Ring Fit Adventure plus social titles such as Animal Crossing. China’s tough regulatory environment is currently a negative and prohibits growth of the legal market.”

Seth Barton is the editor of MCV – which covers every aspect of the industry: development, publishing, marketing and much more. Before that Seth toiled in games retail at Electronics Boutique, studied film at university, published console and PC games for the BBC, and spent many years working in tech journalism. Living in South East London, he divides his little free time between board games, video games, beer and family. You can find him tweeting @sethbarton1.
@sethbarton1
Previous Was Hellblade II actually the first showing of Unreal Engine 5?
Next Expect the unexpected – Sony’s PS5 showcase is both wonderfully and frustratingly unpredictable