This article was created in collaboration with Frontier Foundry.

Frontier Developments has always been driven by a singular passion to make memorable games that create legacies and break boundaries. Now, with our dedicated games label Frontier Foundry, we’re helping others achieve the same goal. By lending studios around the world our wealth of publishing expertise, we’ll bring even more great games to players.

As a world-renowned developer and publisher of genre-defining titles since 1994, we’re uniquely positioned to understand, support, and select the best developers to work with.

With fresh collaborations forming regularly, and many exciting projects now in active development, the future couldn’t be brighter. Look to Frontier Foundry as your new partner in incredible interactive entertainment.

Having travelled forward in time and played your game I already love it, for mere mortals can you explain the core gameplay ‘loop’?
Ha-ha thanks! That’s awfully nice of you to say and we’re thrilled you love the game already!

OK, to the good stuff: Lemnis Gate is a 1v1 or 2v2 turn based combat strategy FPS, where players take turns adding characters into a 25 second time loop. Once a character’s 25 second ‘play’ is done, their actions will repeat over and over until the end of the match. Each character added to the loop is played on top of the previous 25 second period, meaning characters from the past, present and future fight alongside each other and work together to defeat the opposing team.

The results are a mind bending ‘chess meets FPS’ battle where harnessing the strategical thinking of time travel is as important as mastering your weaponry. You will need a keen sense of observation, some outlandish planning and skilful execution! Simple, right?

With time-loop shenanigans and deep gameplay it looks well-suited for streamers/influencers?

Actually, YES! Due to the nature of our turn-based gameplay, spectating is also an inherent part of our core loop. Before you play your 25 second turn you can fly around the map in freecam mode as the current state of the time loop plays back in front of you. All characters that both you and your opponent have already played are fully visible, giving you the freedom to observe their actions and plan your next move accordingly. This examination phase between turns is quite engaging for onlookers as it allows them the time to read the board as you do and anticipate or discuss what possible next plays could be.

As a streamer you could even go so far as to call out your next plays before you make them, like “OK, I’m going to use my sniper and take out the enemy’s engineer right HERE before he can get to my commander over THERE”. Something akin to calling “black ball, corner pocket” in a game of 8-ball! Then everyone gets to see whether you can pull it off. That’s Lemnis Gate in a nutshell.

Why did you decide to work with Frontier Foundry?
As an indie team making a multiplayer online game it was our vision from the very beginning to make Lemnis Gate something that players would (hopefully!) enjoy for years to come. We want to create a game that we can continually iterate on and make better and better over the course of its lifespan.

Frontier has a rich history of building successful living games which are very much as popular years later as the day they were first released. Having this deep knowledge of games as a living experience coupled with their award-winning community development efforts seemed like a perfect fit for Lemnis Gate and its objectives. It’s a really great partnership, and Frontier’s support in the vision of the game has been tremendous.

We really can’t wait until everyone can get their hands on Lemnis Gate and give it a try for themselves! 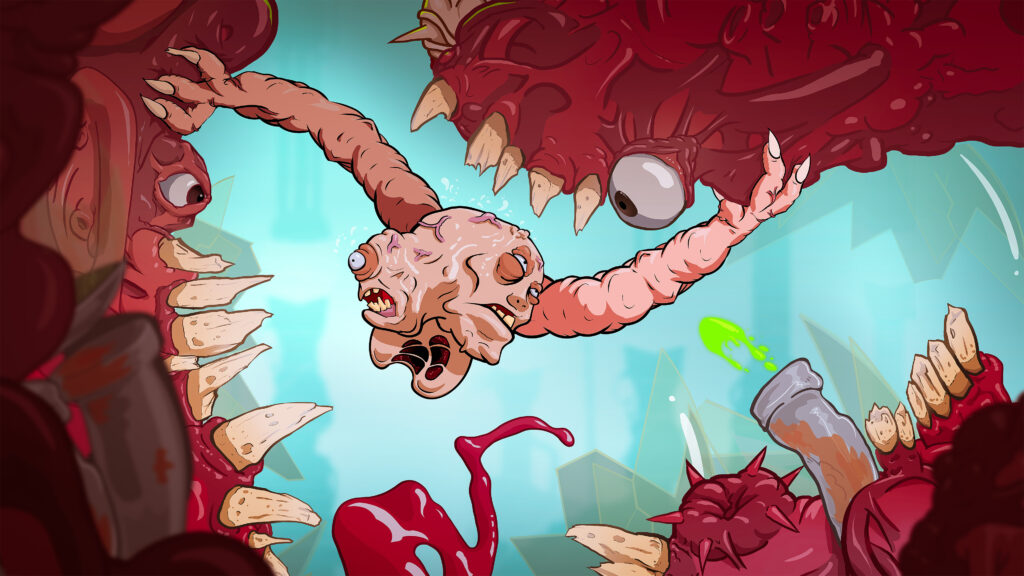 Oh my god that’s disturbing! Brilliant but disturbing. Please explain your ideas in words normal people will understand?
The idea that sparked Struggling is actually a lot more grounded than you would think, especially when you look at our hero, Troy. We initially wanted to work on a game designed around a character controlled by two players.

At first, we wanted to make the protagonist a two-headed ogre of which each player would control a side (arm and leg), and they would need to communicate and cooperate to accomplish tasks. While prototyping this concept, even when only the arms were implemented we found that there were plenty of weird and unique gameplay mechanics. From that point, Denis Simard (our art director) created several potential characters, but as soon as we saw the first sketches of the symbiotic lab-created creature that is Troy, we knew for sure that he would be our protagonist.

We are very happy with the strong emotions (mostly disgust) players feel when they see Troy and other characters from Struggling. The nightmares are worth it.

Showcasing a game like Struggling on the same scene that included many big triple-A titles really identifies with one of our ideals as a studio: being the ‘purple cow’ that stands out from the others. We could not be happier!

Why did you decide to work with Frontier Foundry on the game’s release?
I think it is safe to say that many people are surprised that Frontier Foundry’s first published title is a game like Struggling. When you look at Frontier’s portfolio, Struggling stands out because of its overall weirdness. This is actually the main reason why we decided to go for it! Having the opportunity to work with a company as well established as Frontier is amazing, but our proudest achievement is having them embark with us in the absurd nonsense that is Struggling. We will shamelessly brag about this for years to come. 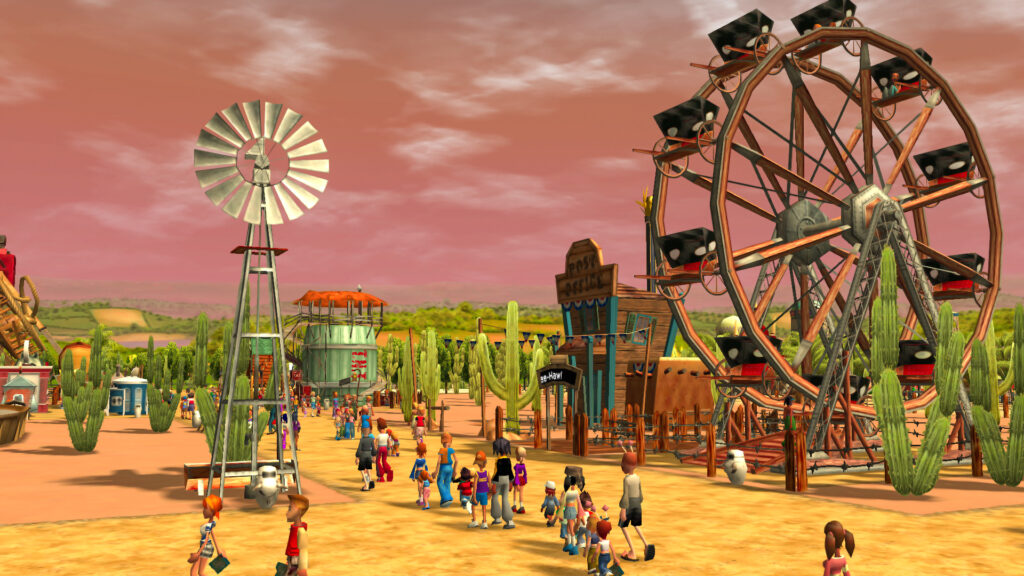 Zac Antonaci, Director of Publishing at Frontier, explains the thinking behind this latest release of a truly classic franchise

This one takes me back a way, why did you decide now was the right time to bring it back?
RollerCoaster Tycoon 3 has a fantastic legacy and it’s something that we have a huge amount of pride in, here at Frontier. After the previous publishing agreement ended, we knew we would want to do something special with the game. The Nintendo Switch gives us a great way to bring one of the world’s most iconic games to an entirely new platform.

With over 10m copies sold to date I’m guessing you’re hoping there’s a lot of fans out there wanting to play it again?
There is no doubt that there are lot of people out there that have enjoyed Rollercoaster Tycoon 3 over the years. We certainly believe that bringing this much-loved title to Nintendo Switch will give those people a chance to re-live that excitement and passion for the game. However, we are also looking forward to welcoming players that have not yet tried RollerCoaster Tycoon 3, but would like to dive in and experience it for the first time.

As an internally developed title why does this sit under the Foundry banner?
While Frontier did develop the title originally, we actually worked hand in hand with our development partner QLOC to be able to bring RollerCoaster Tycoon 3 to the Switch. With this in mind, and because we felt it was a fantastic way to show how serious we are about our all-new games label, we felt that RollerCoaster Tycoon 3 was a perfect fit as part of the Frontier Foundry line up.