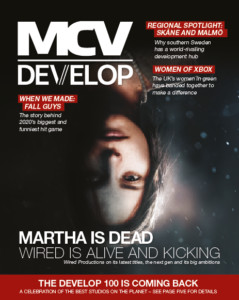 This issue we lead with Wired Productions – with its first-ever console launch title in The Falconeer, and with Martha is Dead following on soon after, Wired Productions is ready to come into the next gen swinging. We talk to managing director Leo Zullo to find out more.

This month’s regional spotlight looks at the region of Skåne and its capital of Malmö. The games industry in the old port town, and the surrounding region, has seen huge growth in recent years, and now has a development community and supporting infrastructure that’s second to none.

While some in the industry have seen thousands of indie game pitches, many others rarely come across these often secretive documents. Stephen Hey shares his pitch for Trailer King, a game that never was, in order to give some pointers on where you might be going wrong.

Stadia has showcased the first set of games released under its Stadia Makers program  We talk to the developers to find out more about the games, and the program itself.

We’re very excited to announce this year’s Women in Games Awards shortlist! Congratulations to everyone who made it out of many, many, many entries. This year’s event will be livestreamed on November 25th. The decision was somewhat forced upon us, but the outcome is looking brilliant. We’re now working with game event production experts ADVNCR on the awards, and thanks to them we’ll be doing a full live production.

Xbox’s UK studios and office have banded together to create a new, officially recognised, group that campaigning for greater diversity, representation and support of women in the games industry. We talk to Rare’s Louise O’Connor about the initiative.

With Microsoft making aggressive, headline-grabbing moves with its subscription service, we find out what Game Pass’ recent developments mean for smaller creators

Forced to give up its usual showbiz trappings, The Game Awards decided to push forward with a more global, multiple location event. Geoff Keighley tells MCV/DEVELOP about his big plans for the big night

Also, we take a look behind the scenes of Fall Guys, the surprise mega-success of the year, and find out what it means for Mediatonic going forward.

Plus there’s our recent industry hires and moves, development regulars and our Final Boss, who this month is Renaissance PR’s Stefano Petrullo. 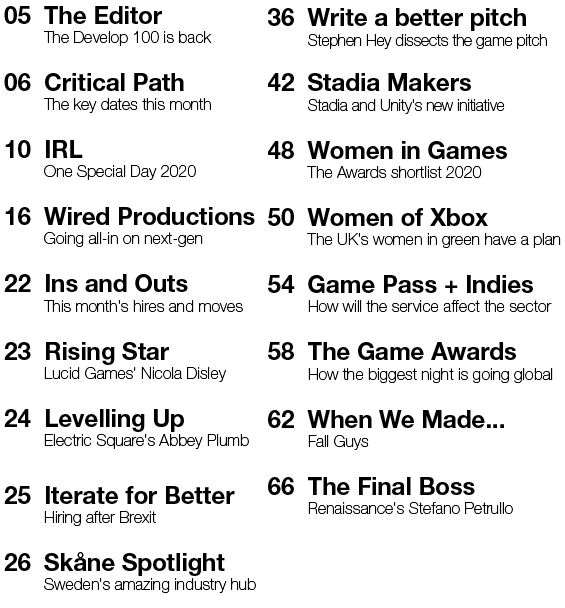 Chris is MCV/DEVELOP's staff writer, joining the team after graduating from Cardiff University with a Master's degree in Magazine Journalism. He can regrettably be found on Twitter at @wallacec42, where he mostly explores his obsession with the Life is Strange series, for which he refuses to apologise.
Previous Gen Z is more likely to use gaming apps than other generations, but spends less time gaming than those 25+
Next Ins and Outs – October 2020’s industry hires roundup