The games industry spent $45M in ad spend in the first two weeks of November, up 80 per cent year-over-year – according to data from MediaRadar.

The jump in ad spending coincides with the launch of the Playstation 5 and Xbox Series X|S, and the data shows that Sony spent significantly more than Microsoft during this period.

Leading up to the launch of the Playstation 5, Sony spent $15M on promotion – More than triple Microsoft’s spend before the launch of the Series X|S. While Nintendo did not launch a console during this period, its ad spend  from November 2nd to November 15th was 138 per cent higher than the two weeks prior. 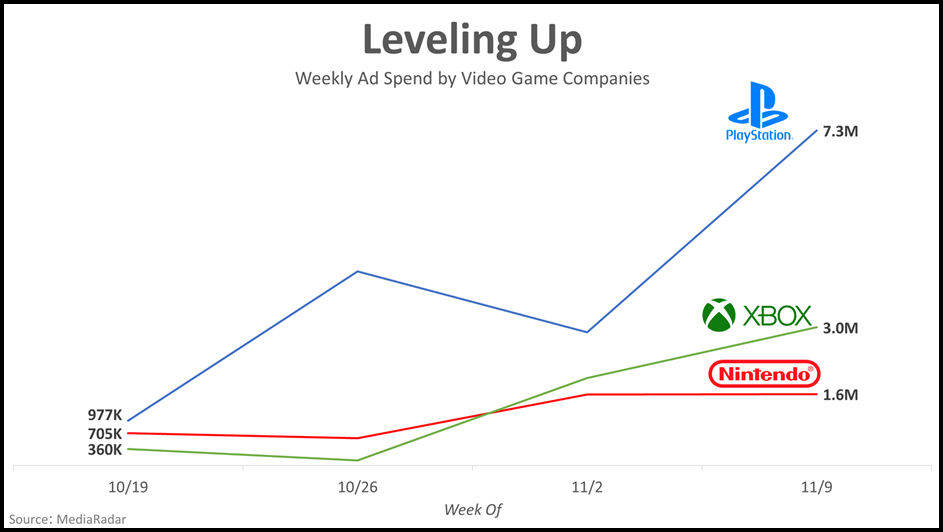 The launch of the new generation of consoles has also led to increased ad spend in other sections of the industry. For instance, the release of big-budget titles around the new consoles’ release, such as Assassin’s Creed Valhalla and Call of Duty Cold War saw ad spend on video game titles up 76 per cent year-over-year in the first two weeks of November.

This was the first week that the mobile games category was up YoY since early April,” said Todd Krizelman, CEO and co-founder of MediaRadar. “It is likely that less commuting and time on-the-go resulted in less advertising from mobile app games during this time.

“This was by far the most active two-week span that we’ve seen from the video game industry so far in 2020,” added Krizelman.

Chris is MCV/DEVELOP's staff writer, joining the team after graduating from Cardiff University with a Master's degree in Magazine Journalism. He can regrettably be found on Twitter at @wallacec42, where he mostly explores his obsession with the Life is Strange series, for which he refuses to apologise.
Previous Why companies need to do more than ‘ticking the box’ – Amiqus’ Liz Prince
Next Assemble Entertainment announces strategic business partnership with Chinese Publisher WhisperGames