Every year at Gamescom, MCV judges the Ukie UK Game of the Show competition and this year we picked Denki’s Autonauts as the winner, as it ticks so many boxes in terms of what we’re looking for from an inspiring new title. Autonauts is charmingly presented but has incredible depth. It’s free of violence, even using love as a resource. It’s educational in the sense that you learn the nuts and bolts or programming but without it seeming like you’re being schooled. And it has huge potential to become a massive phenomenon.

We talk to Gary Penn, creative director at developer Denki, about how the game came about and what’s next for it.

What is Autonauts and how did the idea start?

Autonauts is a game about automation, robots, industries, systems, colonisation… Aaron [Puzey, technical director], the other half of the team, was consumed by Factorio at the time he ended up working on his friend’s farm, where he saw all these systems efficiently feeding into each other and that gave him the idea for a game about using little farmer robots to automate farming. He knocked up a quick prototype that tickled my fickle pickle and we set about seeing what we might do with the idea. We’ve known each other since our DMA Design [now Rockstar North] days and work well together.

Aaron codes and I do whatever else needs doing. We have a healthy Itch.io and Discord community and lovely publishing support. Right now we’re in a phase that’s probably best described as beta. The first proper version is in the hands of real players who are helping us shape its form for initial release. Feedback so far has been honest and helped us improve a lot in a short space of time.

What were your influences?

Factorio and Scratch are our most conscious influences, but when we show people the game, they often comment positively on how it reminds them of this, that and the other, so I guess we subconsciously leaked a lot of ingrained influences too – even from games we’ve never played.

How much of the game as it exists now has come out of learnings from people playing with the toolset?

Back in 2017 we released a public prototype of the core game, which was rough but real: it put the fun into functional. We updated that with new features and fixes every single week for 22 weeks without fail, sharing our ideas and bug lists with the community of fans. That helped us gauge if there was enough interest out there, which there was, but also where that interest was focused, which has helped us shape what we had. The hard part has been making the most of that.

Autonauts has no violence and uses love as a resource, was that a conscious decision in a games market with so much violence? (especially given you worked on first GTA)

I’m not sure how conscious it was. I know that being a parent definitely changes your perspective – you get more conscious of the world around you and how it impacts those closest to you. I’ve worked on GTAs and Crackdowns and… I don’t know, I guess I’m tired of all the violence in games; it’s just so normalised. I’d rather see less of it done right in the right context. 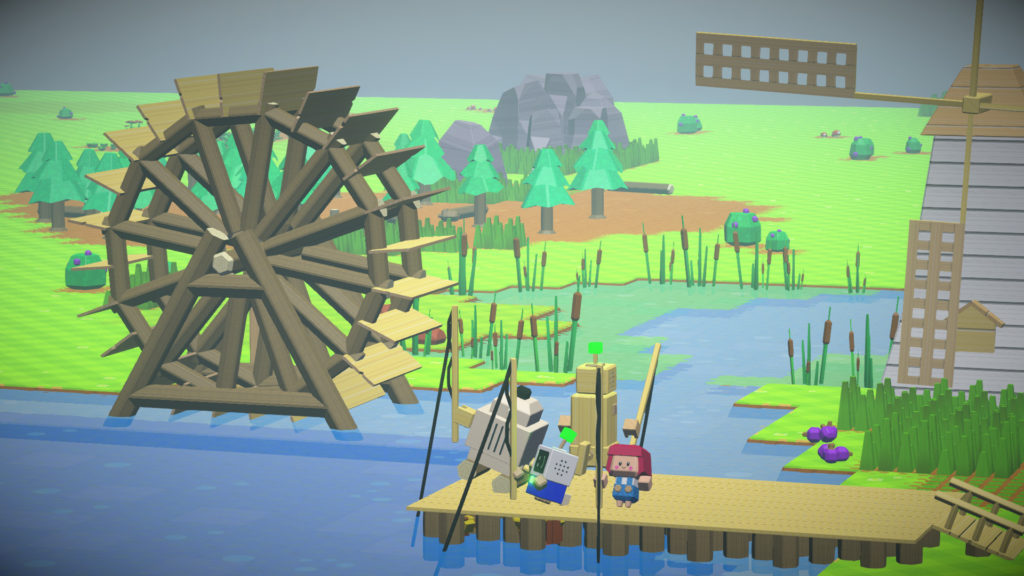 Mmm, edutainment… We didn’t intend to make anything educational or moral or anything other than something we wanted to play and felt comfortable sharing with others. The fact remains that we have ended up with something that does have educational possibilities, but that’s a bonus as far as we’re concerned. There’s been palpable excitement from schoolchildren and teachers exposed to Autonauts so far, so we’re looking forward to seeing if we can build on that.

What are your ambitions for the game as it develops post release?

It feels like we’ve been too ambitious from the outset. As anyone who’s worked on something unlike anything else will tell you, it’s a blessing and a curse. We tried out so many different ideas and game structures, most of them went nowhere, which feels like a waste at the time but it’s all part of the discovery.

Community feedback has been useful for keeping us grounded but we definitely tried to go too far, too soon, at one point. We published this mahoosive technology tree timeline – which wasn’t even complete – with the aim of delivering everything and more with the first release. That just wasn’t practical, so we’ve split the game into three phases – agricultural revolution, industrial revolution, and everything else – and there’s potentially hundreds of hours of play in the first one alone. We’re aiming for regular small monthly updates and then two big quarterly ones, one for each phase. We’d love to make a special free version with more coding-focused challenges for schools.

Why did you decide to partner with Curve Digital?

Simon Bryon’s [publishing director] widdle face! Every time I’ve show him progress, he ends up grinning like a small child who’s just wet himself with glee. His first ever reaction was pure and sincere and that appealed greatly to me.

There are so many possible routes to market these days. We thought we’d give it a go ourselves, expecting it to be hard, but it was just too much for us to bear alongside making the game. We knew the concept had great potential and we had way too many ideas for it, but we couldn’t figure out how to make the most of it. Well, we had a plan – we knew we had to make something, but we weren’t always sure it was the right direction. Anyway, in the end we decided we’d be better off working with a publishing partner. I went around Develop last year showing off where we were at and explaining where we were going. Reactions were mixed but Simon, if anything, seemed even more in love with it a year after I’d first shown it to him.

Aaron and I will be at Twitchcon and EGX so why not come see what makes Autonauts so nice or give us a squeeze on Steam!

Seth Barton is the editor of MCV – which covers every aspect of the industry: development, publishing, marketing and much more. Before that Seth toiled in games retail at Electronics Boutique, studied film at university, published console and PC games for the BBC, and spent many years working in tech journalism. Living in South East London, he divides his little free time between board games, video games, beer and family. You can find him tweeting @sethbarton1.
@sethbarton1
Previous PlayStation boss Shawn Layden departs Sony after 32 years
Next Duke Nukem composer sues Gearbox, Valve, and Randy Pitchford for copyright infringement